Is it ever OK to cheat?

I was asked recently by an adult karate student if they were allowed to grab someone’s arm and pull it down while punching them in the face- during sparring of course! At first I was confused as why would anything NOT be allowed and then I remembered I was thinking Krav Maga and not Karate.

The student was interested to know if they could use a certain technique in a karate competition. Despite having spent over 30 years in Karate I have little idea nor interest in competitions and simply replied “if they were going to seriously hurt you or your family would you stop to think if it was allowed”?  The answer of course was no but I’m not sure she either believed herself or would, should the problem arise.

This has been bothering me as it raises serious questions about what and how we teach self defence to adults and kids and I‘m not talking about specific moves or techniques or how many burpees they can do in a class, its more about what we are putting in their heads. Krav Maga has no rules but how many of us would actually apply that? When is it ok to cheat?

When teaching Krav Maga to the kids (and adults) I use a game during the warm up where they sit back to back and simply have to push each other to one side of the hall or other. A few months back I started asking the kids if they simply had to win what would they do. I got every answer you could imagine until after a few weeks one of them got it and said ‘Cheat’. It was a light bulb moment. 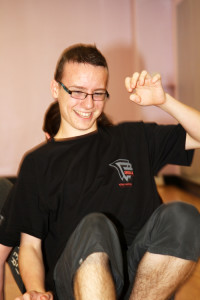 Now when they play the game its entirely different, whereas before the same kids always won now it’s a free for all with kids pushing, tickling, nipping and more importantly laughing. Even at the beginning when I ask “What do you do if you are against someone bigger and stronger than you?” they all shout ‘Cheat’ at the top of their voices.  So the self defence message is getting through…..there are no rules, you might just end up in a situation where you have to use anything to escape or protect yourself.

Of course rules are essential in life, if we defend ourselves with excessive force then it becomes an assault and we should rightly suffer the consequences. This is easily taught and understood by all ages as no one want’s to find themselves in trouble let alone with the police. We don’t need to jeopardise our student’s ability to defend themselves by giving them restrictions on how they can act or should act or more importantly how an aggressor might act. When it comes to self defence there is no such thing as cheating.

Traditional martial arts that have turned themselves into a sport need rules so that someone can win a trophy I completely get that however they are in no way teaching self defence. If you ever have to defend yourself or your family there is no competition, no rules and certainly no time to wonder if you are allowed to carry out a certain technique. Apart from being a lot of fun for adults and kids alike, learning to cheat offers a certain freedom and is certainly a valuable lesson.